Zuul brings lots of advanced features for Continuous Integration and deserves to be usable by more projects, I decided to start the implementation of a Pagure driver for Zuul.

Zuul is a powerful gating system that helps project maintainers to never break development branches. Thanks to unique features such as speculative merging and support for dependencies between repositories, Zuul leverages CI at scale. It also provides out the box support for Ansible (Zuul jobs are Ansible playbooks). Currently Zuul interfaces with Gerrit and Github as input sources. To learn more about Zuul you can access the Zuul website and the Zuul Hands-on blog post series.

Pagure is a git-centered forge written in Python, mainly but not only used by the Fedora project. The pagure API provides most of the features needed by Zuul to gate Pull-Requests. You can see Pagure in action here and learn more about it on the project's page.

Pagure is quite similar to Github as it handles Pull-Requests, where a PR is a branch composed of one or more commits. A PR can be commented, reviewed, updated, CI flagged, and merged via the API. CI results for a PR are reported via the flag mechanism (success/failure/pending). Code review is done via comments with a :thumbsup: or a :thumbsdown: emoji. Pagure computes a score based on those emoji and only permits a maintainer to merge a PR if that score beats a minimum value set in the repository's settings. Pagure publishes repository events via web hooks and provides repository API tokens to perform authenticated calls like merging a PR or adding a CI flag.

Here is a link to the patch on OpenStack's code review server: https://review.openstack.org/#/c/604404/. It provides, for a single repository, a check/gate/post workflow and has been validated with Pagure's current master branch at the time of writing (future Pagure 5.2).

The driver makes use of the web hooks to receive repository events such as Pull Request Opened or Pull Request Commented. Events are received via Zuul Web and sent to the Zuul scheduler. The driver is able to read Pull-Requests status to get the Review score via the count of :thumbsup:/:thumbsdown: emoji, the CI status (flags) and the merge state. It is also able to set CI status and Pull-Request comments.

The driver provides Triggers and Requires filter attributes that can be used to define a Zuul pipeline. Below is an example of a Zuul pipeline for a Pagure source called pagure.sftests.com:

Currently three type of events can be used as triggers in pipelines:

The following requirements are supported: 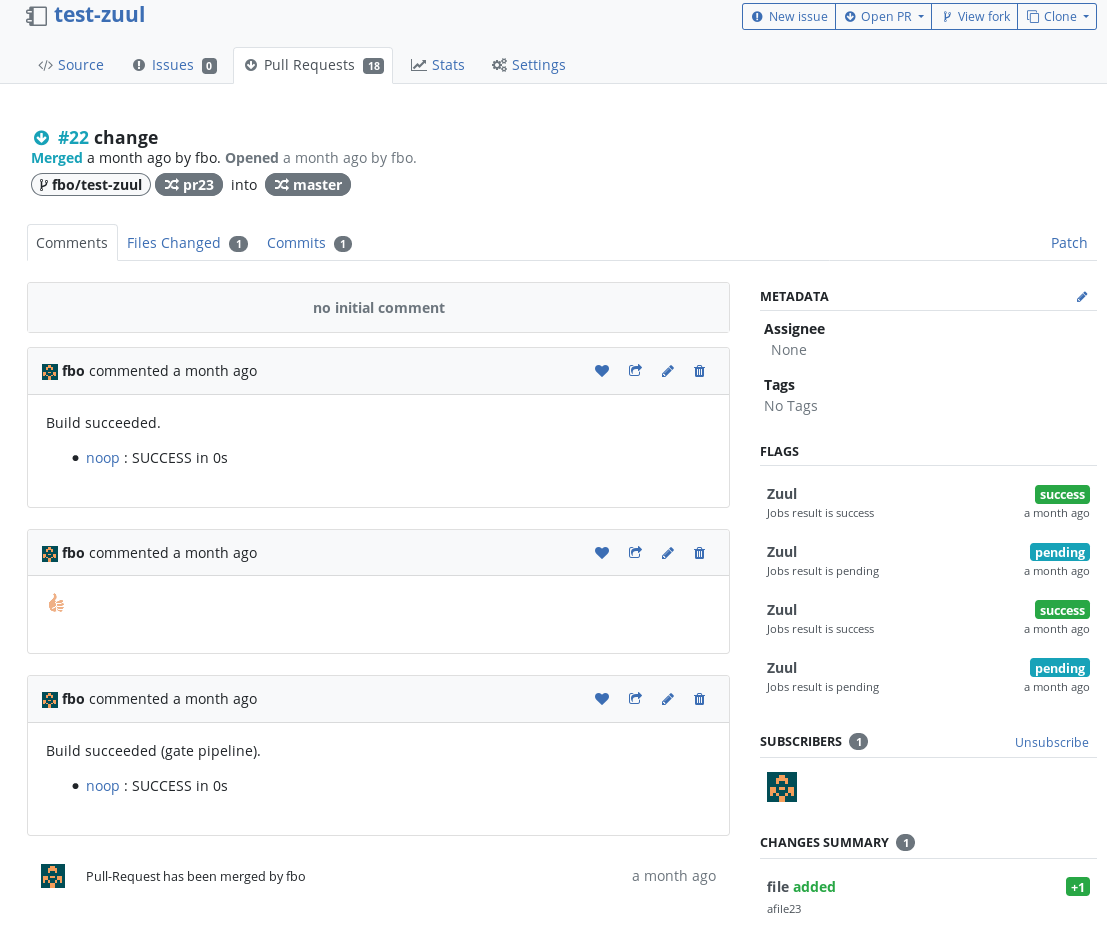 Setting up a Pagure repository for Zuul

The API token ACLs must allow at least:

The web hook target must be (in repository settings):

The repository settings to be set:

The connection to define in /etc/zuul/zuul.conf:

Here is the list of the issues that currently prevent the driver to provide the same capabilities as the Gerrit and Github drivers.