In this article, we will explain one of the most important features of Zuul: the dependent pipeline, also known as the gate pipeline.

Keeping the master branch sane can be difficult when:

Until now, the best practices to mitigate these problems were to enforce the following:

These best practices, however, do not guarantee the health of the master branch at any given time. Let's consider this very common scenario on a project with two maintainers, M1 and M2:

In other words the master branch is broken, and everybody working on the project is impacted in some way, either because their own code won't build, or because they have to figure out the problem and fix it.

Sure, continuous builds help catch the problem as soon as possible, but if building and running tests are costly operations in time and/or resources, and therefore aren't performed after every commit, how many patches might have landed since the breakage, making it even more difficult to pinpoint the change that caused the issue?

One could also object that maintainers just have to always make sure to validate patches on the latest version of the master branch, but it might just be too hard to enforce manually in projects where commits can occur faster than testing or building. One would have to implement some form of "merging semaphore", meaning that maintainers would have to wait on each other, beating the purpose of having several of them in the first place.

But what if we could avoid that trouble altogether and guarantee by design of the integration pipeline that the master branch can pass tests and build at all times?

The trick is to deport the merging powers of the maintainers to a single, automated "gate keeper". Maintainers approve patches for merging, and the gate keeper makes sure they can land without breaking the master branch.

Thanks to its gate pipeline, Zuul decides whether a patch can be merged into the master branch or not, by ensuring the patch is always tested over the latest version of master prior to merging. This pipeline is designed to avoid breaking the master branch.

The gate pipeline takes care of the git rebases in order to run CI job(s) on the expected state of the master at the time the patch will be merged. This is called speculative testing. Let's see how it changes the previous scenario, this time in chronological order:

(for simplicity's sake, we'll call acceptance tests, builds, and generally any kind of automation used to validate a patch "jobs".)

What happens if B is rejected, though? The gate pipeline is able to discard failing patches and rebase subsequent changes in order to optimize testing time. For example, let's imagine changes A, B and C have entered the gate pipeline in that order, and that a job fails when B is on top of A. The pipeline will evolve like so:

Instead of waiting for C's jobs that will propably fail as B introduced an issue, Zuul immediately cancels C's jobs, rebases C on A and restarts C's jobs. Zuul reports the issue for B on the code review system.

Clone the demo-repo and provision it with this demo code .

Then, we are going to:

First, in .zuul.yaml, define the project's pipelines. We use the virtual job noop in the check pipeline to force Zuul to return a positive CI note +1 Verified.

Second, create the script trigger.sh in order to better highlight the gate pipeline's specificities in the status page. It adds some delay in the job's execution time based on the existence of some files at the root of the project.

We make sure this script runs prior to unit testing by modifying the tox.ini file as indicated below.

Finally, submit the change on Gerrit:

Do not forget to approve the patch to let it land.

In this scenario we propose three changes:

Patches are available in this archive.

In the gate pipeline, before merging the changes, Zuul will test them speculatively.

Let's approve all of them in the right order. 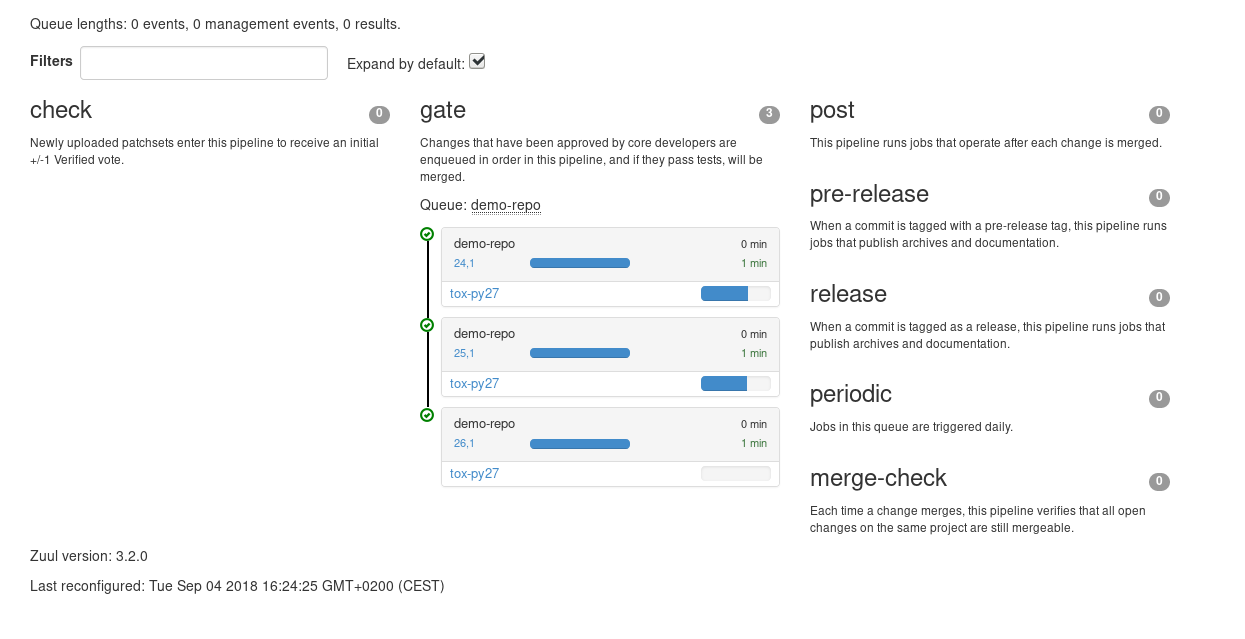 You should soon observe that Zuul has canceled the running job for C, and rebased it on change A as B introduces an issue when rebased on A. Zuul won't merge B but will report the failure on Gerrit; A and C will build successfully and be merged.

Let's have a look at the Zuul Scheduler's logs (/var/log/zuul/scheduler.log), try ssh to sftests.com virtual machine:

The executor process reports the issue to the scheduler

Restart the tox-py27 job with the updated context

Zuul's dependent pipeline is an elegant way to ensure the health of code repositories at all times, allowing developers to focus on more important things like new features, and expanding and automating test coverage.

In this article, we showcased a simple use case but the features of the dependent pipeline also apply to complex project testing scenarios (supported by Zuul) like: