In this article, we will explain how project dependencies work in Zuul.

The Case for Cross-Project Testing

Software tends to be less and less monolithic, and even before that trend took off most software projects depended on third party libraries or external frameworks. Even from an architectural standpoint, it isn't rare to see projects split into functional subcomponents, like frontends, client libraries, or servers. And with the advent of containerized applications and micro-services, it becomes more and more complex to ensure that every cog in the system works well with the other.

Zuul was designed with dependency testing in mind, and can help a development team make sure that changes to any subcomponents won't break the whole project.

We've introduced the notion of dependent pipelines in Zuul in a previous article of the series. It's time to see how it can be used beyond speculative merging on a single project.

Zuul can be configured to incorporate branches (usually master but not necessarily) of other projects into its workspace for a given job. This can be done with the required-projects stanza in a job definition, for example:

Whenever the job sf-ci is being run, Zuul will also pull the sf-ci and sfinfo projects into the job's workspace. Of course, these projects need to be known to Zuul through its tenants and projects configuration.

It is also possible to include other projects known to Zuul with the "Depends-On" stanza, as we will explain below. In that case, the jobs must handle the case where such projects are present in the workspace.

When a pipeline is Independent, changes that land in that pipeline are tested independently from each other, meaning that the tests are not sharing a common workspace during testing. This is fine when doing preliminary validation, like in the check pipeline.

As an example, let's assume three projects A, B, C defined in Zuul; their check and gate pipelines are configured to execute a job called myjob which requires A, B and C.

myjob's respective workspaces will be: 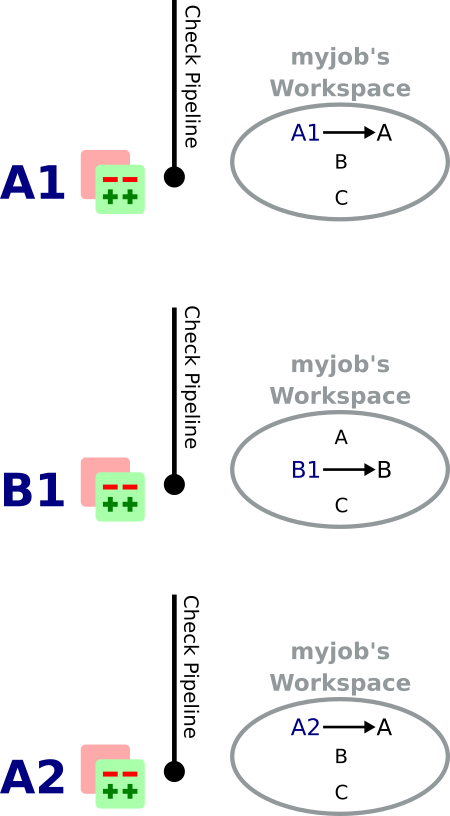 In that case patches are tested independently and the builds can be run in parallel.

When a pipeline is Dependent, it means that it can define queues to which projects can be associated. All the patches of projects that belong to the same queue are tested together, in their order of landing in the pipeline; it means that they are included into each new workspace as patches get tested. Typically, gate-type pipelines should be defined as dependent in order to catch dependency problems before they get merged.

Let's now assume projects A, B and C belong to queue "abc" on the gate pipeline. When patches A1, B1 and A2 land in the gate pipeline in that order, this is what the respective workspaces for myjob will look like: 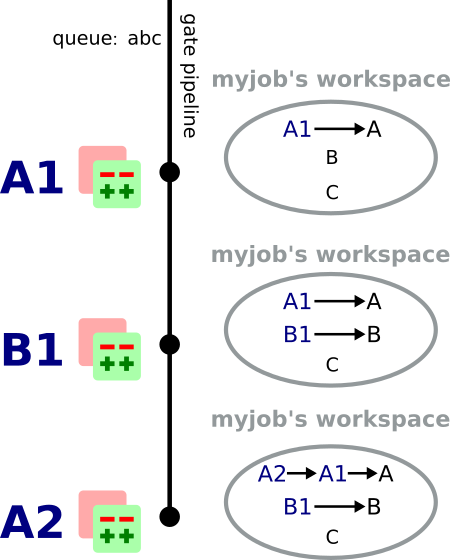 A Dependent pipeline will catch any problem introduced by incompatibilities brought by new patches.

What if a patch needs an unmerged dependency to pass the check pipeline? This can happen, for example, when an incoming patch on a client library expects an implementation of the server API that is still being reviewed. Independent pipelines allow cross-dependency testing as well by using the Depends-On keyword. By adding a line like:

In the commit message or the Pull Request's description, you can make Zuul aware that a patch must be added to the workspace. Of course, this propagates to dependent pipelines as well.

This is a very powerful feature that allows developers to work on several components in parallel, regardless of how fast patches get merged. With any other CI system, developers would have to wait until the dependency gets merged before they can get feedback on their patch from the CI!

We will set up two Python projects:

As always, let's start with a fresh version of demo-repo. It is assumed that this project already exists; if not follow the instructions here.

Clone demo-repo and provision it with this demo code.

From your host, clone the config repository and configure git review:

Run git review to send the patch on Gerrit:

As admin, approve the patch on sftests.com's Gerrit UI.

Once the changes have been applied, clone demo-lib and provision it with this code .

Define initial CI on the projects

We will add some simple tox validation using the Zuul jobs library.

For each project, commit the file and create a review:

Make sure the patches pass the CI, and approve them from Gerrit's UI.

Commit all and create a review:

Make sure the change passes the CI, and approve it from Gerrit's UI.

In order to do this, let's add a new job definition in demo-repo's .zuul.yaml:

Let's break the new job down a bit:

Commit all, and upload a review:

Wait until the check pipeline completes, and let's take a closer look at what is happening. First, let's have a look at the Ansible variables that were set by Zuul for this job: go to https://sftests.com/zuul/t/local/builds and click on the last successful build of tox-demorepo (it should be in the first or second row of the table), then click the log url and zuul-info, then inventory.yaml. Have a look at the zuul object:

zuul.projects is a dictionary of all the required projects we declared in the job's definition. For each required project, the path to the checked out code is in src_dir. These variables are available at the job's level, meaning that you can write your playbooks using these. This should also explain the specific value we chose for zuul_work_dir.

Finally, make sure the change passes the CI, and approve it from Gerrit's UI.

Note that here, we want to keep testing demo-lib as an isolated module; which is why we're keeping the tox-py27 job. Also, jobs are shared globally within a Zuul project, which is why we can reuse tox-demorepo from demo-repo.

As usual, commit, review and approve on Gerrit:

In this scenario we will create a patch on demo-lib that breaks demo-repo.

Create a new branch on demo-lib:

Wait a few minutes, and you should see the following CI results from the check pipeline: 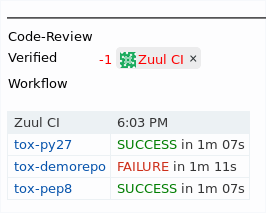 Even though this patch passes demo-lib's unit tests, we can see with tox-demorepo that this patch would break demo-repo at the current state of the master branch.

First, let's add a function to demo-lib. Create a new branch on the demo-lib repo:

Now let's create a patch in demo-repo to use our new function. Create a new branch on demo-repo:

The check pipeline will return a failure, since we're using a version of demo-lib that wasn't merged yet. Indeed, in the logs for the tox-demorepo job, we see:

Let's amend our commit message to specify the unmerged dependency we need:

Add the line Depends-On: https://sftests.com/r/#/c/{patch_number} to the commit message, where {patch_number} is the number of the unmerged patch on demo-lib.

The check pipeline will show the dependency:

This time the tests pass; we effectively managed to validate a change before its dependency was merged.

As exercises left to the reader:

In this article we've learned how Zuul can handle dependencies between projects, so that side effects can be detected early. It can also be used to speed up the development of features, as patches can use unmerged dependencies in their workspace.

You should know enough by now to set up your own dependency-aware CI with Zuul. So happy testing !